We are speaking of Mercedes. We can see two new products that stand out over the others, at least from an aerodynamic point of view when compared to the 2015 car.

Compared in the video is the old nose which is similar to the 2015 car. The new W06 is connect with the frame and has a vanity panel that conceals a duct that carries air from the bottom to the top of the profile. The physical principle on which this system can be partly compared to is that of adding additional flow on the bottom like the RedBull (which we will see in the next article). The fact of having high-speed air flow streams that must make the changes to follow the trajectory of the car profiles, leads to the creation of instability that may degenerate the laminar profile of the fluid flowing along the vehicle. Passing a laminar fluid can cause a number of problems such as for example, the difficult management of the vortices on the car body.

Without going into too much detail, having the creation of vortices in this area will have fluctuations of the direction and intensity of air that hits the driver’s helmet directly, which can vibrate and oscillate without allowing a good concentration.

A further example can be found not far from the driver’s head: the air intake which is in a higher position than the helmet. If the entrant is a turbulent flow or an unsteady, oscillating flow, then it is easy to understand that the suction will not be properly performed and even then the power transmitted to the ground will not be affected.

Then, in many more cases, the driver is not affected, having regard to the limited region in which a flow may become turbulent (and return to) limit the concept of layer, but have a limited area of turbulence does not mean, however, that this does not damage the aerodynamics.

A final reason that you can think of extracting air from the underside of the vehicle can also be carried by the needs of downforce.

We are going to assume they are applying this concept to the entire body of the car. The flow is two-dimensional and that there are no leaks around the side profile (not because actually there are not, but because they do not change the physics of the problem by setting only the values ​​that per se are still generated by such aerodynamic principle; this remains valid and simply assumes a loss).

NOTE: the articles I write and I write will be targeted to make the reader understand exactly what takes place around a vehicle, because they simply say that a solution has made efforts to better manage flows may not be enough. The flow management is something very complicated and there are a lot of facets too difficult to be able to understand in a few words so; This will take me to provide interested readers motivations and concrete principles to give a much more precise idea of ​​what it means to manage the flow. This, for example, is a further example of what it means to understand how the car moves the air and how we expect to have to act, to manage a flow (e n this occurrence its instability in the turbulent regime). 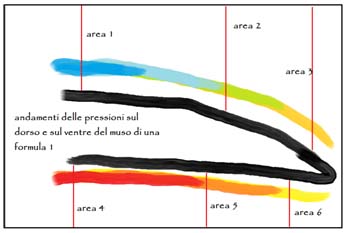 The area 3, on the upper side, is certainly greater than the area 1, and then reducing the passage, the air must flow more rapidly. This will establish a decreasing pressure. The opposite occurs in the lower side. Here the pressure is indeed growing.

Besides, if you wanted to check the progress of these pressures with a CFD analysis, so a little ‘more reliable than a drawing “eye” that we would see along the top of changing from a red (high pressure) to more of a green color (high speed).

In the lower part of the flow it will start from the red high pressure, to descend to a lower pressure value, which in any case will remain greater than the value of pressure above the nose.

This if well designed, becomes disadvantageous seen that to obtain a pressure difference of typically provides a resultant of an upward thrust.

The thought that you can do therefore remains: why do not I take a certain amount of increased pressure air and the exhaust on the back going to raise the average pressure at that point? The values in the field will carry out different equilibrium values, for signal transmission and other processes (for which the parties concerned can be safely treated in a deepening in part) and this could lead to a certain advantage in terms of performance, in addition to maintaining a good condition of the boundary layer.

We therefore understand what may have led Mercedes engineers to install a complicated but so effective tool. (Effective if done right. If incorrectly done it can be detrimental).