At the turn of the millennium, after almost 10 years of absence in the segment, Fiat decided to bring back to their list a two-seat spider, light and fast, the Fiat barchetta.

Front engine, short tail, a sleek and very clean line for this small spider. The Fiat barchetta has undoubtedly become one of the HistoricFiat’s Car register. It may not have had the success it deserved, but it certainly left its mark.

Produced from 1994 to 2005, its name is written strictly with the lowercase letter, barchetta. The project started from the chassis of another Fiat, the Punto. The 1.8cm³ aspirated engine also supplied on the sister Fiat Coupé, delivered 130hp of power and fitted a new phase variator which allowed the valve opening interval to be modified, optimising not only the power supplied but also consumption and emissions. 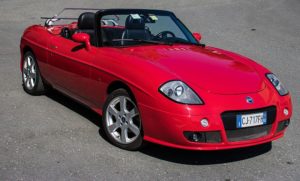 The bodywork has been updated twice. The first models have a cleaner and rounder line, then the third triangular brake light was added in the middle of the tailgate of the trunk. Later in 2003, following the failure of Maggiora, the body-shop that produced it, the front was completely revised, becoming more imposing and squarer.

Many special versions have been made, with different colors, both of bodywork and of hoods, special optional (even with a subwoofer!) And obviously with Italian names like Lido, Riviera, Palinuro or Amalfi.

own one, from 2000, and so I can very well describe what it’s like to drive it. I must admit that the engine is brilliant and responds well to the accelerator pulse. From 4000 rpm onwards it pushes and is also felt by a good roar. Between the curves it’s very light but I don’t trust to push it to the limit.

You might think that the Fiat barchetta is not reliable but I did 4000 km in one month, for two consecutive summers, far and wide for Italy. If you are really passionate, you cannot buy at least a spider in your life, because it will give you something special. Driving in Top Down, with the hood lowered, is undoubtedly one of the most beautiful experiences that an automotive-fan can do. Of course, it’s not the only spider that returns these feelings, but doing it in our country with a classic car built entirely here, in Italy, perhaps means an extra gear.

The car that battled the MX-5 meets that car that is one (sort of). Which is sweetest? Progress report: Fiat Barchetta vs 124 Spider >> https://t.co/en6AEislfx pic.twitter.com/1QClmIJJ76

Like the Fiat 124 Sport Spider, the ancestor produced from 1966 to 1985, the Fiat barchetta is destined to take on value. There are not so much barchetta, in good conditions, under € 5,000. While the 124 Spiders in good condition are not sold less than € 15 / € 16,000 and the price that can only increase, especially if we focus on special versions or models with particular care. Beyond personal tastes, there is only one difference between the two models: it is estimated they sold more than 150,000 124 Spider while less than 60,000 barcehtta.

So, do you think is a good investment?  Today, I hold mine tight.