Just one element of this year’s almost unbeatable Mercedes has emerged as small weakness. Brakes.

@BremboBrakes at @F1NightRace brake wear is the greatest issue, 24% of the lap spent on the brakes pic.twitter.com/ZF2qdfUaDi

Despite the supremacy imposed on the championship, several times during the season engineers have warned the drivers to manage breaking power due to overheating problems. Mercedes uses discs and pads of French Carbon Industrie (the team uses Brembo’s calipers); this particular disc has in fact a concave profile for better cooling. All other main competitors go for Italian Brembo’s full systems instead.

F1 brakes are made of a mixture of carbon, polymeric and ceramic materials that can deliver a huge friction power at defined temperature range. This is around 700° degrees, but can go up to 1000° or even higher. If heat increase too much wear also does so, and brakes can fail. Similarly, excessive low temperatures may trigger other issues: under 300° disc material tend to vitrify, losing its frictional power. Braking in the corners increase temperatures dramatically, that then drop during the straights; so it is important to find good balance between cooling and materials.

Different track layouts require cooling ducts differently shaped in order to adapt not only to the number of corners but also their frequence. Mexican Grand Prix’s track altitude for example requires the biggest ducts in order to cool down brakes due to altitude: thin air is less efficient when it comes to cooling power.

Brake ducts are elements that disturb the ideal air flow, but cannot be avoided. The idea is to find neutral solutions that don’t affect aero. As always engineers take advantage of the lack of specific regulations in this area creating mini wings and micro spoilers in order to minimize brake ducts aero impact. Hot air flow is of course more powerful and behave differently from normal air, this is why brake ducts are so important and is rare to see them two races in a row shaped the same.

Mercedes in fact tends to use smaller ducts, and Carbon Industries’s discs seem to have a better braking power, but they also look more delicate and fragile. In most of the tracks they give a solid advantage to the team but balanced with issues on other circuits, usually the more aggressive ones in terms of brakes material consumption.

In the last years engineers have also started to use brakes heat (that has always been considered an inconvenience) to warm up tyres. It is now a powerful ally to radiate heat to the wheel thanks to the use of nanotech paintings. 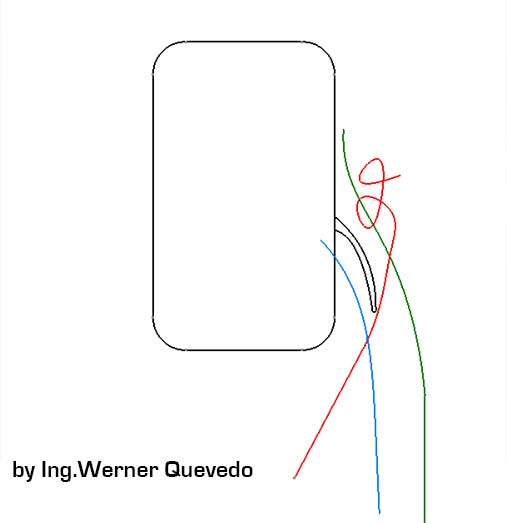 red Flow curve not aligned with the socket, aerodynamics Disorder aligned Green Flow, neutral behavior of Celeste socket Flow Going Into the outlet and goes to the system to cool
By Ing. Aimar Alberto and Ing. Werner Quevedo
Translation by Stefano De Nicolo’