The S-Duct System of Red Bull and Toro Rosso

After the Italian car of Toro Rosso chose to insert an updated S Duct, we decided to explore it. Personally, I believe that it seemed strange that it would only serve to stabilize the flow in the area on the upper surface of the nose.

I say this to explain that I have heard and read from various sources an in-depth technical analysis:  given the softness and the low slow of hat section, a low surface roughness and the relatively limited length, I think that at this point there is not enough high turbulence phenomena which may limit the aerodynamics and increase the aerodynamic resistance of the area.
To the contrary, they are trying to see more downstream elements subsequently effected. We can see though that there are serious difficulties in containing the negative phenomena relating to the instability of the air, specifically the helmet and the characteristic hump of the formula which is the engine’s air inlet. 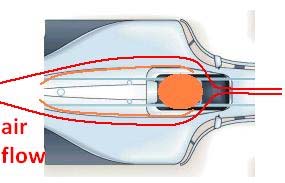 Looking at things from this new point of view you could see far more important and beneficial effects.

It is known that the air flow comes from the bottom, at more or less the height of the suspension arms. It is then re-directed higher at the front almost to the point of maximum height just in front of the driver.

One can imagine that just for the fact that the current flowing on the upper part must bypass the obstacle of the driver and air inlet, that the air requires a longer route to bypass the obstacle and increases in speed which means a reduction of air pressure.
But this isn’t the case for air flow that passes below, even that flow increases its pressure by slowing down due to specific interference with the surface of the car.
This means that the car has more pressure on top and less pressure on the bottom sides. When the air is re-directed from the bottom portion along a S shaped conduit formed by a constant section along its entire length; essentially we get a constant P higher than that present on the upper side.

The resulting aerodynamics then can be as follows (this is the explanation below): 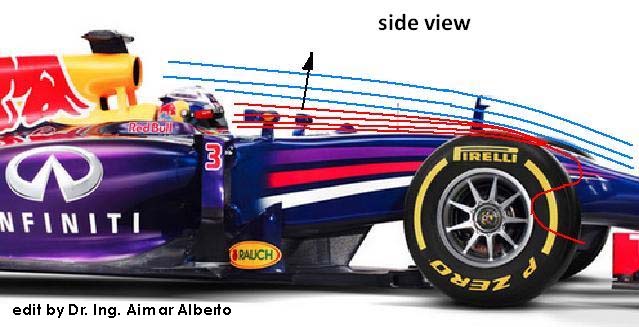 Due to the fact that the air from the vent exits with a pressure on average higher than the one present at the bottom point, it tends to expand and enlarge its trajectory, both upward (side image) toward both sides (top view). In doing so it also forces the flow already present in the area to follow a deviated trajectory (red lines).
As a result, I think it can be a series of stream lines that affect the obstacle of helmet and inlet at an angle that allows an easier obstacle avoidance, and for this reason leading to lower aerodynamic drag of the vehicle.
A second advantage is to have its own downforce generated by the transport of a certain amount of flow from an initial point to a final state with greater height. The force to generates this displacement and pushes down the car through the S-duct.
These two are the main advantages that lead us to choose such a complex second conduit to implement and integrate into a formula 1 project