The engineer Enrique Scalabroni needs no presentation for someone who is passionate about motorsport: the long (and full of success) experience between Formula 1 (with the winning Williams FW11 and FW11B, the Ferraris 641 and 641/2 that almost won the Championship in the ’90 with Prost, and still Lotus, Asiatech) and Endurance (with the iridated Peugeot 905 of the “invincible team” led by Jean Todt).  All these experiences, with the Ford GT aerodynamic development in the FIA GT1 Championship, made Enrique Scalabroni one of the greatest experts of the motor techniques.
The editorial staff of Newsf1.it asked him some questions, about the “hot topic” in F1 today: the correct use of new Pirelli’s larger tyres.

It is, for me, a particular emotion to interview the one who conceived and created the one single seater to which my first memories of a “young passionate about F1” are related: the Ferrari 641/2 (the car that took the 100° victory for the Cavallino Rampante in the highest category), the one and only competitive car to be exposed at MoMa in New York. 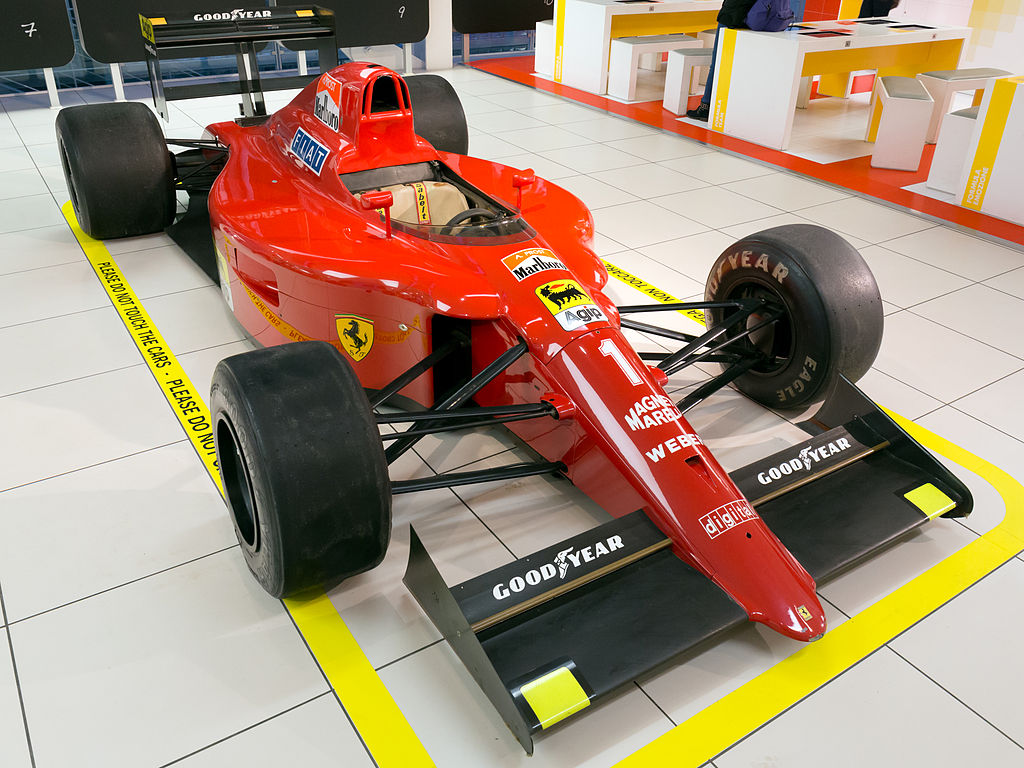 Engineer Scalabroni, anyway, makes me immediately feel comfortable, and in this beautiful chat via Skype he answers to my questions about the main themes in Formula 1 (and not just in F1).

NewsF1 – Engineer Scalabroni, thank you so much for your availability and kindness, but I’ll go straight to the point: lately Mercedes, as his team principal Toto Wolff had said, has been complained with Pirelli because of their tyres, that don’t fit the W08 perfectly (making them notice that the new XL tyres are more suitable to Ferrari. Tronchetti Provera, Pirelli’s C.E.O. denied every accusation).

This comes from a wrong or lacking job in the pre-season test made by the Stoccard/ Brackley/ Brixworth team?

Eng. Scalabroni: This year, with the regulatory changes introduced, who made the cars more charged aerodynamically and with larger tyres that increase the mechanic grip, the cornering speed has increased too, compared to the previous 3 years (+48 Km/h in some turns); it was necessary to start “almost” from a blank sheet of paper.

“Almost”, because Ferrari and Red Bull had already something in their experiences to take advantage of, thanks to their most representatives technicians, Rory Byrne and Adrian Newey, about the use and the maximum utilization of the larger tyres (a background that belong to the Engineer, thanks to his years in Formula 1 during the Goodyear period – n.d.r.).

These two teams conceived their cars with concepts that fully marry these necessities. Firstly, adopting the concept created by Adrian Newey, the “High Rake”, with suspension systems with fairly soft calibration (the difference between Ferrari and Red Bull, actually, consists of the Renault Power Unit lack of power, a PU which is renamed TAG Heuer by the English- Austrian team. The PU doesn’t allow a development of the car with a relevant aerodynamic load).

The softer suspensions and the high rake arrangement, besides allowing a “vary” product [CX x A] in relation to the speed, with the lowering of the rear end on velocity they also decrease the drag (thanks to the reduction of the Cx [Coeff. of form], due to the change of incidence, of few degrees less, of the back wing, with consequent diminution of the Main Section [A] of the car), and then return to the standard values on lower speed conditions.

Furthermore, the suspensions with softer torsion bars allow to look for a better mechanical grip, letting the tyres work in the correct “range” of structural rigidity above the whole elastic system, as well as in the proper “thermal windows of exploitation”, which Pirelli established can vary from the 90° minimum for the low-working softer mixtures up to the 140° maximum of the high-working harder blends (values, in absolute terms, enough elevated).

Instead, Mercedes followed a completely different philosophy, a legacy of the one used in the last 3 years of domain: a single seater with less rake, but with rigid suspension. A philosophy that seems not to be the right one to make the tyres work correctly.

Moreover, we have to consider the deep organizational change into the team: Rosberg’s gone (a driver that, from my direct experience, is a great test driver, who gives correct feedbacks to the engineers), Paddy Lowe’s farewell (he was the one who found the balance) and James Allison in. It’s not a coincidence that Mercedes, with Allison in, is having the same problems that Ferrari had until last year, to keep the tyres up  to their right temperature.

Ferrari has done a great job in understanding what was necessary to draw the 2017 car, as good as finding the “driving feeling” to give to the drivers, which importance has increased a lot this year.
The Scuderia has been committed to the job during the tests, a lot more than “her” challengers (Sebastian Vettel in particular, which lately he’s showing a great race pace throughout the competition) and we can find the proof in the excellent performance by Kimi Raikkonen in Qualifying in Montecarlo, a clear example of the great technical result that Ferrari has reached.

Instead, Mercedes, with Hamilton and the new driver Bottas (a fresh member of the team, but a valid and fast driver), might take a little more time, during this season, to fully understand how to make the tyres work correctly, also due to a minor participation, and for sure not comparable in terms of commitment, with the one Ferrari had during the tests Pirelli did to develop the 2017 tyres.

NewsF1 – The “ban”, a result of Chief Engineer Simone Resta’s letter to FIA, on suspensive passive systems which tend to simulate, hydraulically, an active behaviour, may have affected the current Mercedes deficiency?

Eng. Scalabroni – Maybe, but not in such a high percentage as derived from the philosophical choices examined before.

We can say that the decision on the high rake car allows to find more balance even with a short wheelbase, while the long wheelbase adopted by Mercedes, probably thanks to the new internal organs distribution (engine, gear) and the aerodynamics (that, to reduce the Cx, has to work at lower distance from the ground, with stiffer suspensions and less excursion), create weight problems, and the rise of the Moment of Polar Inertia in the car when it changes directions in the corner, resulting in a reduction in angular acceleration.

As a consequence, you may experience an initial understeering effect (the car tends “not to turn”) in the slow and middle speed corners. Besides, the low rake setup forces the usage of more rigid torsion bars, to make sure that when in acceleration the back axle doesn’t go too close to the ground, to avoid losing efficiency of the rear diffuser. This excess of rigidity also produces lack of traction and overheating of the back tyres (because of the wheelspin effect).

Consequently, an increase of the rigidity of the front suspension can give us a car which from one side is more reactive, but that, on the other side, due to equilibriums modifications to set-up the rear balance, has more difficulties to adequately keep up the front tyres temperature, suffering in the braking phase as well. Plus, as observed in Montecarlo, to not be able to transit on the kerbs without bouncing excessively.

NewsF1 – Next Grand Prix, on the Montreal track; from a technical point of view, which kind of features will require? How the strengths of Ferrari and Mercedes will balance on track?

Eng. Scalabroni- Surely the long straights will make the Mercedes Power Unit express all their best, thanks to their more perfect mapping, but we should consider the asphalt on track, disconnected and corrugated at certain points, and some turns that require good tractions properties and a good braking.

Here, the less rigid arrangement due to the Ferrari’s High Rake can do a good job. Moreover, the less tyre wear of the SF70-H (mostly at the rear; Mercedes, instead, finds more trouble into releasing completely to the ground the power generated by the MGU-K, that, as any other electric engine, has a high instant torque peak) can be the key to a good box strategy with the “undercut”, that worked well in Monaco too (undercut consists in staying out on track and go to the box after your direct challenger – n.d.r.).

NewsF1- Thanks again for your answers and your kindness, but before we say goodbye, one last question about Endurance. In two weeks the mythical 24h of Les Mans will take place: on your opinion, which are the main points in the next challenge, on the Circuit de la Sarthe, in the LMP1 Hybrid category (with the Toyota- Porsche challenge) and in the LM Gte Pro category (with the tryptic of challenger Ford, Ferrari and Porsche, plus the “underdog” Aston Martin and Chevrolet Corvette)?

Ing. Scalabroni- In the prototypes category, after the incredible loss of some edition (like in 2016, on the finish line – n.d.r.) Toyota seems to have all that is needed to achieve success. Porsche, instead, seems to have made choices that can led to doubt for the reliability side.

In races like Les Mans the most important thing is not pure speed, but the pace race. In my direct experience, during the Peugeot 905 program, it was preferable, sometimes, to lower the maximum engine speed of the V10 motor (limiting therefore its absolute performance), to give more importance to the reliability, the race pace and consumptions.

In the GT category, considering the recent BoP (Balance of Performance, decreed by the delegated technicians of Les Mans to balance all the values on track – n.d.r.), the challenge between the two cars that, in theory, should be the quickest, Ford and Ferrari (Porsche seems to be still paying some trouble on the dynamic – the Stuttgart’s prototype is a mid-engine 911- and on the tyres consumption  – n.d.r.) will be decided on the level of experience on the car, regulations and tyres of the two constructors.

And it’s the same thing that we see in Formula 1 right now.