The new edges on the rear wing of the McLaren, seen at Hockenheim, was much talked about, so we decided to go deeper to understand the principles on which they are based. You can definitely notice a “jagged” profile in the leading edge of the second plane, the upper one, which connects at the DRS system.

You can see the same thing on the trailing edge of the lower profile. I will try to explain how the first element belonging to the DRS system. It is known that whenever air finds an obstacle, it clearly collides and generates an area of high pressure area on the front of the obstacle precisely because of the arrest of the air flow. 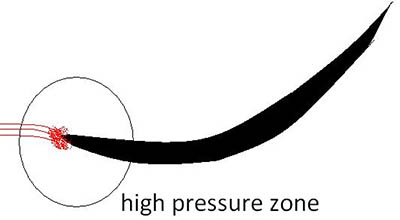 We are looking at the wing from above and not from the top as the previous figure shows. Notice the high-pressure line follows around the edge since this is placed to be perpendicular to the motion of the air flow. 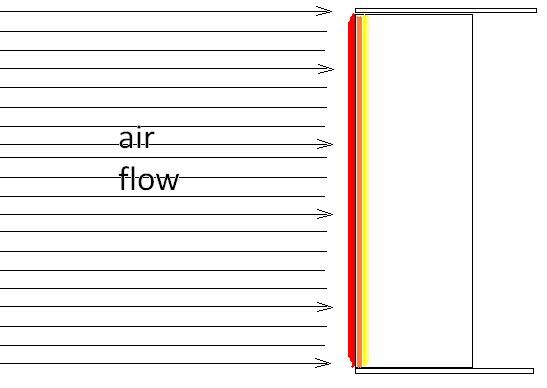 If you decided to use a serrated leading edge just as the McLaren has, we could see that instead of nearly all of the entire profile being perpendicular to the flow, only small portions are perpendicular and other portions are oblique. The pressure increases in lower amounts and the flow is not slowed down. In doing so, first we shrug off a good portion of aerodynamic drag and create another advantage: since the air strikes more violently it surely cannot mean that it slows down. It takes less kinetic energy to recover speed loss due to the air crash. This means that the entire first part of the wing will be surrounded by a flow velocity greater than the previous solution in which the edge was straight. This increases the relative speed of the air with respect to the wing, a phenomenon which also leads to an increase in downforce. 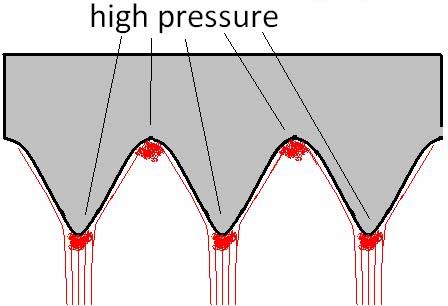 As you can see, small dots are placed where flow is completely stopped, while for most of the length of the flow is partially distorted and not slowed down excessively, which is the case with the classic profile. The flow is distorted in a way similar to having to climb around a tooth. If we look at two neighboring teeth, air is accelerated between them because of the lower passage section created between the two. The consequence of a decrease in pressure is an increase in downforce. There could be a minimal increase in lift as seen in profile. The tooth seems to take a buckle which is very reminiscent of the profit of the wing. Also in this case the flow that passes on the lower part will have to accelerate relative to the flow which passes on the top and this means a difference of pressures is created that pushes the car even more toward the ground.