I have hypothesized a little theory regarding the new front end nose of the Toro Rosso, which it is more relatable to that seen year to date on Red Bull

This theory concerns only the treatment of the flow on the front part of the vehicle, and does not cover where they go once they enter the inlet for two reasons:

Image that you have two situations: that of the old Toro Rosso (referred to now as TR) and that of the new TR

It is obvious that in principle the two configurations have the same footprint compared to the straight flow that comes towards the car.

This means that the flow will encounter an object in both cases and will have the same footprint area compared to the current nose.

The trick is to understand how the air is able to overcome the obstacle.

Note that if we have to sacrifice a part of Ek, reducing it, it means that we are reducing V (vehicle speed) that will match the new smaller value of Ek.

This energy goes where when inserted? In the flow, this is deformed along surfaces which were not previously there.

The speed variation, multiplied by the amount of air flow provides the amount of force that it takes to move all the air particles.

F=M(V2-V1) is the calculation that is used for all the new directions of the 3D flow.

If we divide the time it takes for the particle to undergo the change in velocity then we have an amount equal to the kinetic energy lost by the car: dQ = M *(V2 – V1) *dt

The last concept to review is the one that defines the conservation of mass in the flow:

The amount of mass is not alterable and if at the beginning of the study of the phenomenon we have a hundred molecules of air, at the end we will have just as many, we could say “nothing is created or destroyed.”

At this point we have introduced the laws that serve to describe the flow around the nose of the car.

Let’s look at the old solution 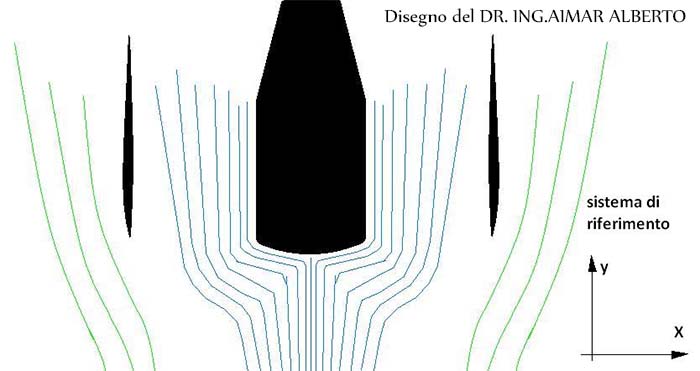 According to the law of the conservation of mass, all the particles exist just as before and all particles interact with the nose by surrounding it. In doing so, they extend their speed along the X axis (before this was not present, only the Y axis, Vy.)

For the rule that involves the loss of kinetic energy for the car, we note that Vx is transferred to the flow from the sides of the form and provides a force that increases the resistance of the car.

According to the laws of the conservation of mass, if a series of molecules must encircle the obstacle, it means that the molecules must occupy the space all around it, thus having to widen the airflow path to the very distant current path lines (green lines), in order to have the space to pass. 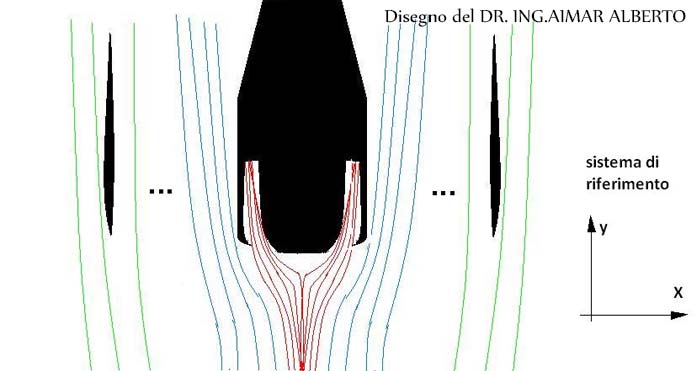 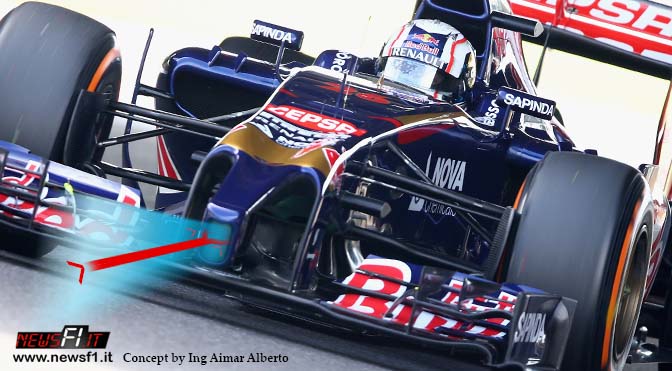 The fact of having an inlet in that position serves in a way to circumvent the principle of conservation of mass because the quantity of molecules that meets the obstacle is no longer the same amount that must eventually circumnavigate the object.

The number of atoms that must go around is less, requiring a smaller space.

This would then lower the total amount of the flow, also visible at a distance from the green lines that in the second scheme appear much straighter and less spaced.

All of this is due to the fact that the air moves along X because it cannot move to another stream. Thus assuming a lesser speed Vx, creates less force on the car and consequently a reduction in aerodynamic drag.